A sneak peek of the SPEAK Dublin founders!

Let’s begin by introducing ourselves. Here’s the SPEAK Dublin team: Beatriz, Joana and Mariana. We are three close Portuguese friends that have been enjoying living in Dublin so much that we decided now is the time to give something back to the community!

How did we meet? Well… like true Irish, in a pub, watching rugby. Beatriz and Joana met in one of the most iconic pubs in Dublin. Listening to someone speaking your native language is always comforting and the connection was almost instant. Beatriz and Joana were both new to the city and quickly became good friends. Mariana moved to the Irish Capital one and a half years later. Since Mariana and Joana knew each other from university, Mariana quickly became part of the group. The friendship has been growing ever since and sharing this experience of living abroad has brought us closer together. Although we’ve met incredible people on the way, it’s not always easy making friends in a foreign country. Factoring in a language barrier definitely does not help either.

I was born in Braga and raised in Porto (Portugal). I have an academic and professional background in nutrition. In 2017 I had the urge to experience something new and challenged myself to live abroad. That’s when I moved to Dublin. I have been working in Health Science, but I also had the opportunity to embrace different roles and responsibilities. Among other things, I was able to teach English as a foreign language to young athletes. I am passionate about science, education and communication and I love to be challenged. I feel most fulfilled when transmitting something good to others while creating an impact. For those reasons, I join the SPEAK community. My friends Joana and Mariana challenged me to found SPEAK Dublin with them.

I am a Portuguese pharmacist living in Dublin, currently working for a pharmaceutical company. My passion for the medical field paired with the opportunity to make an impact in patient care made me choose this career path. For me, the benefit of becoming a pharmacist was being able to help others, not only patients or other healthcare professionals. I am also passionate about cultural integration, traveling and meeting new people. This is the main reason why I moved abroad. In Dublin, I decided to become the co-founder of the social program SPEAK with my friends Beatriz and Mariana and take the opportunity to give back to the community while making a difference and connecting with people.

I always felt the need to make the world a better place. For this reason, I initially became a pharmacist. After having a few international experiences such as being part of a student exchange program in Poland and an internship as a hospital pharmacy in Spain, I realised I wanted to know more about what was outside my comfort zone. I wanted to know more about diversity and cultures. Therefore I travelled more, moved to London (where I had a chance to be a buddy helping disabled children with severe communication needs) and later Dublin. As a passionate about helping others and having had experienced how challenging it can be to integrate in a new community, I felt the need to contribute a bit more to the Dublin community and its newcomers.  This made me become a co-founder of this promising project in Dublin with my friends Beatriz and Joana.

Why do we think SPEAK Dublin can make a difference?

Since the moment we moved to Dublin we felt that there was a very diverse community living here. Although the country retains its very unique traditions and culture (which we can obviously notice – the music, the sports, the pubs, the Irish people – who are so friendly!, etc), the diverse migrant population is increasingly becoming a well-established part of Ireland. Dublin, in particular, has become a more multicultural and cosmopolitan place in the past several years. It came to our attention that with the increasing economic growth, Ireland rapidly changed from a country of high emigration to high immigration. Isn’t this a great phenomenon? And we can tell you, Ireland’s capital is an amazing city bursting with culture! 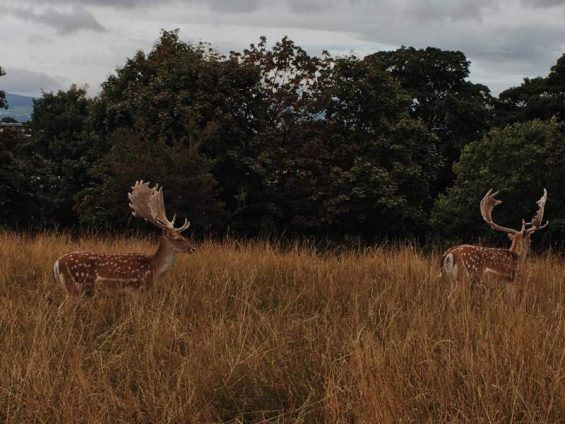 Dublin is among the friendliest cities in the world. However, the reality of being a non-native speaker in this city can still be a challenge to greater social understanding and inclusion. English is the most common language spoken. Although it is known as a ‘world language’, for some migrants it still hinders their integration efforts. This is where SPEAK Dublin comes in, breaking the isolation barrier with community-led language groups and cultural exchange events. This is why we believe we can make a difference!

SPEAK is not only a great way to bring newcomers and locals together. SPEAK also serves the purpose of sharing a language and culture with others.

We are very excited to continue this journey with SPEAK Dublin. Hopefully, we will be crossing paths soon, whether you are a participant, a buddy or an ambassador.

Beatriz, Joana and Mariana are three Portuguese friends that met in Dublin, where they live and work. Being migrants themselves in a multicultural city, they felt motivated to create a positive impact and take the opportunity to give back to the community while making a difference. Having heard about SPEAK they decided to take it to Dublin.