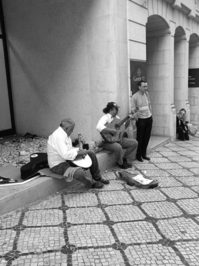 audade. This one colourful word, a mixture of melancholy, nostalgy, longing and sadness is paired with fado, the genre of music specific for Portugal, always sang by one person, accompanied by two guitars. The lyrics are full of love, longing, fate, the entire game of feelings and emotions. Some people call it the “Portuguese blues”, and I think that is a fair comparison. The word fado itself translates to “fate” but Portuguese rarely use it in this context, leaving it rather for songs lyrics.

I’ve heard about this type of music for the first time during my Portuguese language class. One of the students said that she started to learn Portuguese because she loves it, especially Amalia Rodrigues (who died in 1999), considered the “Rainha do Fado” – the queen of fado. She made this music popular outside Portugal. She also mentioned Mariza, an African-Portuguese, who popularises this music around the world.

Also at this time I’ve heard about the movie Lisbon Story (which I wrote about in a previous pos)t. Fado inspired the band Madredeus, who performed the music for this film. Our teacher told us also about the movie “Fado” by Carlos Saura. It’s more like a painter’s impression than a conventional film – for almost two hours we can watch and listen to the artists singing the most emotional music that exists in the world, accompanied by dancers, contemporary as well as ballet, movie clips, views of Lisbon. Everything bursts with colour and is wonderfully composed. The genre inspires some of the songs that are somewhere on the periphery of fado – watch it and you will see what I mean. You can see the entire movie on youtube. 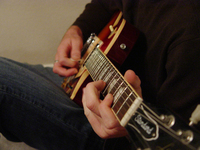 You can also find there a documentary “a history of fado” with Mariza. Theoretically, according to purists, fado is performed only in Portugal, but there is also a Japanese fado. An artist Tsuquida Hideco who has lived and studied in Lisboa. While being there, she started singing fado in the ’80; she’s met Amalia Rodrigues, who supported and inspired her. She was the first person performing those songs in Japan, and she still performs. For her contribution to art, she received the Medal of the Portuguese Order of Merit in 2010.

There are two types of fado: from Coimbra and Lisboa that are divided by an interesting cultural difference – the former is performed by both sexes, and the latter belongs to male voices. For me, the most important in fado is it’s emotional load, as well as in blues. Even when the story is happy, you can find this drop of sadness that makes it real, vivid and harmonious.

If you’re not a fan of that kind of music, see the movie and listen to the songs nevertheless, as this will help you to understand the Portuguese culture much better. Moreover, you will polish your Portuguese language in a very nice way.

Adriana is trying to do the impossible: join her passion for cooking, Brazilian Jiu-Jitsu, writing and photography. She’s curious about people, loves reading and crazy long walks.

Mariana is Chief Marketing Officer at SPEAK, she loves nature and adventure, has a sort of obsession for typical sayings! View all posts by Mariana Brilhante

One Reply to “Fado, a big part of Portuguese culture”